Having been elected on a program of generating jobs and facing the closure this summer of General Motors’ Oshawa assembly plant east of Toronto – with the loss of 3,000 jobs – the government of Premier Doug Ford clearly could not remain inactive.

OTTAWA – The Ontario government has launched a C$40 million ($29.8 million) policy package designed to grow the Canadian province’s auto sector and stem the hemorrhaging of its jobs and output to Mexico and the southern U.S.

However, while there is support for the plan in the industry, there also is skepticism that the plan will move the needle on preserving auto output in Canada’s most populous province.

Industrial intervention was always going to be a tough call for the new populist Conservative government of Premier Doug Ford, elected to move away from the highly activist industrial policy of its unpopular Liberal predecessor defeated in last June’s provincial poll.

However, having also been elected on a program of generating jobs in a province with a 5.7% unemployment rate (in January) and facing the closure this summer of General Motors’ Oshawa assembly plant east of Toronto – with the loss of 3,000 jobs – the Ford government clearly could not remain inactive.

Its plan includes funding for innovation and training. A micro-credentials pilot will fund targeted retraining for highly specific skills. The province also will try to modernize apprenticeship training, orienting it toward auto-sector needs. An automotive modernization program to help parts suppliers become more innovative will make C$10 million ($7.4 million) available to small-and-medium-sized suppliers; each can qualify for up to C$100,000 ($74,000) if granted companies match these funds.

The Ontario government also says it will remove some regulatory barriers which it says impede auto-sector growth – such as improving the transparency and stability of property-tax assessments. It intends to streamline approvals and certification for auto-manufacturing sites; review the industrial electricity rate paid by the energy-hungry auto sector (a key competitive issue, given the need to spend money heating plants during Ontario’s cold winters); and spend money internationally promoting Ontario’s auto sector.

Todd Smith, Ontario minister of economic development, job creation and trade, says: “The auto sector is key to the success of our economy. When the sector succeeds, the province succeeds.”

The industry provides 2.4% of Ontario’s GDP, directly employing more than 100,000 people according to the government. Toyota, Honda, GM, Ford and Fiat Chrysler all operate plants in Ontario, purchasing from more than 700 Ontario parts suppliers and 500-plus tool, die and mold makers.

Forecasts from Wards Intelligence/LMC suggest the Ontario government will struggle to keep auto production in Canada.

Wards projects a steep drop in Canadian car production from 504,179 units this year (2019) to 200,260 in 2026. According to this analysis, Ontario (the only Canadian province with a full automotive manufacturing sector) will become increasingly reliant on small-truck manufacture – which will hold up: 1.43 million units projected for this year, compared to 1.51 million units projected for 2026.

He endorses the plan’s 50/50 funding of investments in training, helping the sector “properly skill-up people so we can retain workers who understand how to run 21st-century production systems.”

With Ontario’s parts sector supplying more than 35% of its output to U.S. assemblers and 5%-7% to Mexico, it needs to remain competitive despite some higher built-in costs – especially in energy. “We need to squeeze where we can,” Volpe tells Wards. The best way to do this is ensuring “operators have a higher level of efficiency. We cannot be lazy about this.”

Mark Nantais, president of the Canadian Vehicle Manufacturers’ Assn., has said he is happy with the deregulation pursued by the Ford government, although the organization has yet to comment on its $C40 million plan. 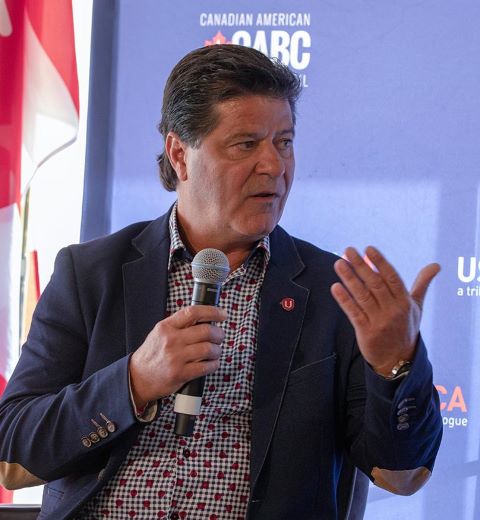 He welcomes the Restoring Ontario’s Competitiveness Act, passed in December. This enables municipalities to fast-track planning approvals for new industrial and business development, should they choose to, enabling them to ignore legal protections of the Great Lakes and greenbelts, avoid holding public meetings and evade planning appeals.

Canadian auto workers union Unifor is less happy with the government’s approach, claiming the Ford plan is a “warmed-over package of existing policies.” It wants a more direct approach, calling for “a coordinated and effective automotive investment program.”

Unifor president Jerry Dias (above, left) calls the latest plan window dressing to deflect potential criticism of the government over the Oshawa closure: “It’s packaging and PR, but nothing meaningful. Ford claims his goal is to maintain production and secure investment in Ontario. His plan does absolutely nothing on that front.”

Dias notes the Ontario government promises additional policies and support for the industry, commenting to Wards: “We certainly hope so. His government better up their game fast and get real in terms of a serious auto-investment program…offering a bunch of PR, and nothing else, won’t do it.”