Ontario is putting $40 million over three years into a new plan for the auto sector, including funding for innovation and training.

The money is part of a 10-year plan for strengthening the auto sector’s competitiveness, which comes as General Motors plans to shut down a plant in Oshawa, Ont., at the end of the year — a move that will see 2,600 workers lose their jobs.

Economic Development Minister Todd Smith said part of the plan is aimed at workers like those at GM, who can be retrained and still work in the auto sector.

“We want to give those auto workers an opportunity to get trained quickly,” he said. “Micro-credentialling is part of our plan, so they can get up to speed and not just continue jobs in the current wave of auto sector jobs, but in the automobile sector of the future.”

A micro-credentials pilot will focus on targeted retraining for highly specific skills. The province will also modernize apprenticeship training, with the goal of making it more responsive to auto sector needs.

“Our government understands what auto companies need to thrive and prosper in our province,” said Premier Doug Ford. “This is like Christmas coming — us getting elected — to industries across the province. They’re as happy as anything. They actually have a business-minded government.”

Ford’s announcement comes as General Motors plans to shut down a plant in Oshawa, Ont., at the end of the year, a move that will see 2,600 workers lose their jobs. (David Goldman/Associated Press)

As part of the $40 million, an automotive modernization program to help parts suppliers become more innovative will make $10 million available to small and medium suppliers, who can each qualify for up to $100,000 as long as the company itself matches the funds.

Flavio Volpe, president of Automotive Parts Manufacturers’ Association, said the announcement mirrors what suppliers have been asking of government.

“For the supply sector, what’s important is as long as the automakers stay here and make cars here and buy parts from us we’ve got a very healthy and efficient business,” he said. 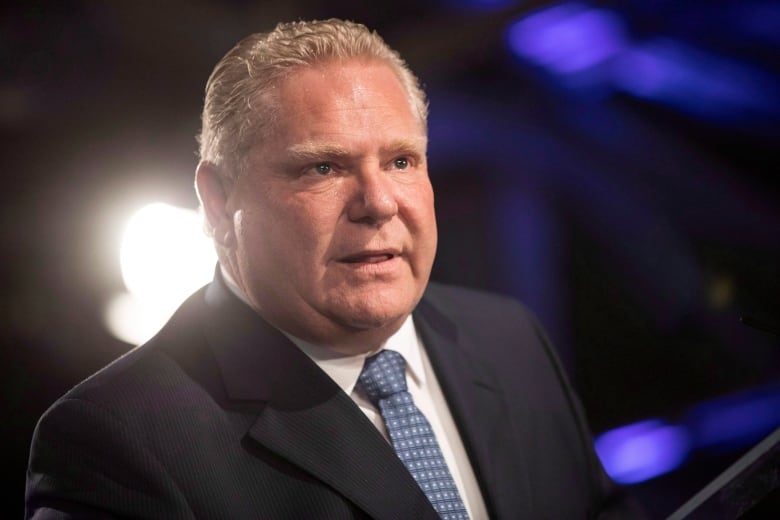 Doug Ford says his government getting elected is ‘like Christmas coming’ to industries across the province.(Chris Young/Canadian Press)

The president and CEO of Canadian Manufacturers and Exporters said the plan is an important step in creating a competitive business environment.

“We are particularly pleased to see commitments focused on reducing the cost of manufacturing in Ontario and the openness to exploring investments supports for the manufacturing sector,” Dennis Darby said in a statement.

“These two actions are critical to boost manufacturing investment in the province and improve the competitiveness of globally integrated sectors, including automotive.”